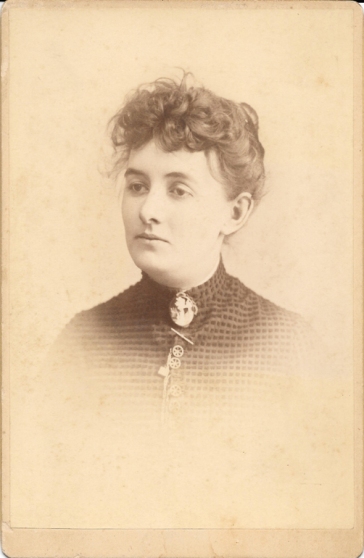 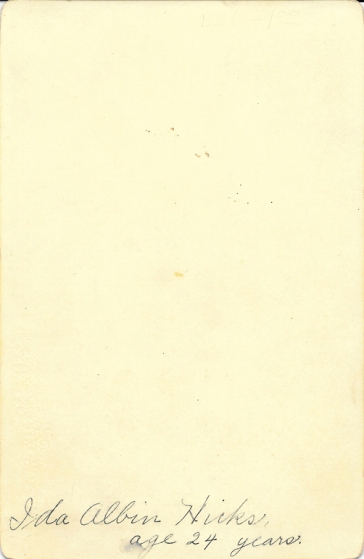 I came across this cabinet card and having no photographer’s location, combined with the common surname of Hicks, I wasn’t sure I would be able to identify the sitter. However, I thought the middle name of Albin was unique enough to tip the odds in my favor and I brought the photo home.

A quick search revealed an Ida Albin Hicks and a Hugh Hicks buried in the Stilesville cemetery in Hendricks County, Indiana. Another search pulled up a marriage record for Ida M. Albin to Hughey H. Hicks. Tada! The middle name wasn’t a middle name after all, it was a maiden name. A bit more research, making sure the age and dates matched, and I could say with certainty that I had found my gal.

Ida May Albin was born April 22, 1864 on a farm near Cloverdale, Indiana. Her parents, Thornton P. Albin and Mary Layne Albin were married for thirteen years and had four children: Nevada Alice, Lemuel Calvin, Luella Bell and Ida, the youngest. Ida’s mother died on March 22, 1866, when Ida was just two years of age. The family resided in Plymouth County, Indiana, where her father made a living farming. In December of 1866, her father remarried Lucy Bourne with whom he had three additional children: Lizzie, Thomas Paul, and Fred.

When Ida was nineteen, her father died. This was about the time she started teaching after she finished her education in the common schools. She supplemented her education by working in the Central Normal School in Danville, Indiana. Founded in 1876 in Lagoda, Indiana, the Central Normal College specialized in teacher training (it moved to Danville in 1878). Ida taught in the Putnam County schools for a number of years. She married a fellow teacher, Hugh H. Hicks, September 8, 1889. Hugh studied for his career at State Normal in Terre Haute and also at Central Normal. He taught for 21 years and then turned to farm for a living.

Ida died on August 26, 1924, aged 60 years, leaving behind her husband and daughters. Her obituary read, “These girls, with the stepdaughter Monta, were her joy and interest.  To them she gave her best.”

Mabel followed in her parents’ footsteps and taught school for over twenty years in Putnam County, Indiana.

3 thoughts on “To Them She Gave Her Best”