What better time than Valentine’s Day to feature photos of couples from my collection. These first two cabinet photos were found at an antique mall in Auburn, Indiana.  The previous owner removed them from an album and noted on the back what was written on the discarded album pages. The photos, individually, are not identifiable, as one cabinet card supplies a location, but only a first name and the other provides first and last names of the couple, but no location.  Luckily, I’m quite thorough when looking through bins of photos, and recognized that they featured the same young woman.

I believe this photo was taken during their engagement or possibly as a wedding photo.  Granted, the young man does not look as if he’s excited to be there.  In fact, I see him as looking quite dejected.  But, Rosa May McKnight and Robert Eldred Wright wed on April 14, 1898, when they were 19 and 24 respectively, and they had forty-three years of wedded bliss (at least I like to imagine it was more bliss than not)! 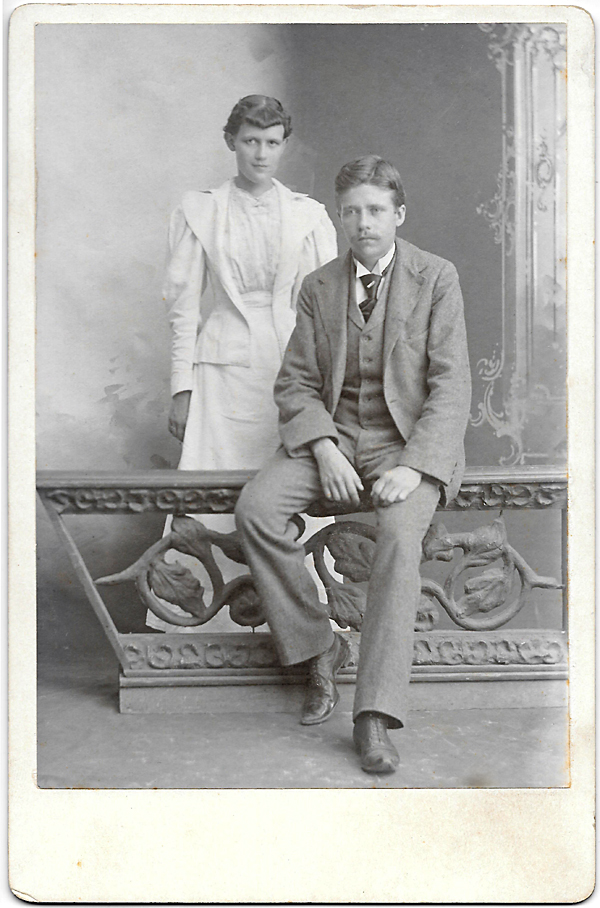 Robert was the owner of the Nebraska Salesbook Company, a print shop business, which he founded in 1895.   To Robert’s credit, he grew his business from that of three employees, including himself, to that of one hundred when he retired in 1933.  The couple made their home in Lincoln, Nebraska, where they raised four children; William, Lillian, Laverne, and Mildred.  One child, whose name is unknown, died very young.

The next photo is a bit later than I normally like to collect, but just look at that dress, with all of the lace and the drooping bouquet in her hand!  And it’s probably just me, but I’m getting a Mark Pellegrino vibe from the gentleman sitter.  Beginning in the late 1890s, cabinet cards were replaced with stiffer mounting cards that were constructed of multiple layers of dense pressed cardboard that produced a matte textured appearance.  These mounting cards came in gray, dark green, bronze and black and also in many different sizes, unlike cabinet cards which were traditionally 4 1/2″ x 6 1/2″.  For example, this card mount is 6 x 7 3/4″.  If you’d like to see the photo as it is mounted on the card, you can find it below, after sources.

In addition to the names on the back of the photo, the writing also identified John and Mary as “Grapa (sic) Art’s Mom & Dad.”  This additional bit of information was a great help, as there was another John Goller living in the same area.

Miss Mary Thieroff, 23, married John Goller, 33, in 1899 in Defiance County, Ohio where they made their home and had three children; Alma Laurine, Clarence John, and Arthur Henry.  John’s parents immigrated to the US from Germany, as did Mary’s father.  I wish I could say they lived happily ever after, but I can not.  Mary died in 1913 from complications of surgery and John married a second time to Miss Cora Greenler.  He died in 1934.