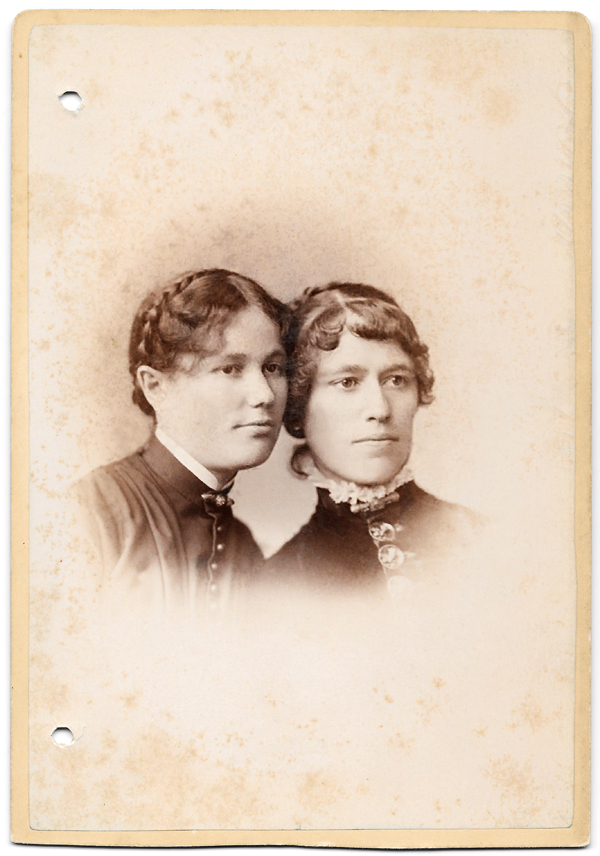 This cabinet card was found in a Goshen, Indiana shop and features Lizzie and Emma Boeckling during happier times; I uncovered a sad tale during my research.

Lizzie and Emma were two of six children born to John and Johanna Boeckling of LaPorte, Indiana.  They were the middle children, with the eldest being Carrie and Albert, and Frank and Hattie, the babies of the family.  Tuberculosis, also known as consumption, took five of them to the grave.  And strangely, Carrie, Albert, and Lizzie, the first three to succumb to the disease, each died when they were 30 years old.

I found this family group image on Ancestry and thought how wonderful it is that the Boecklings, although torn apart by death, will, in this photo, forever remain together.

It seems that as the family’s suffering grew, so did the obituaries.  Unfortunately, Carrie’s obituary doesn’t provide much insight into her life.  I only know that in 1880 she was working as a store clerk.

Albert fell ill while visiting his parents in 1888.  Upon his death, he left behind a wife, Hattie (nee Davis), and three young children.  Sadly, two of those children soon followed him to the grave.  In July 1888, his 11-month-old daughter, Ruth, died, and in 1892, seven-year-old Blanche Irene died of scarlet fever.  Only his son, Samuel, lived to adulthood.

After losing two siblings when they were 30, I can only imagine how Lizzie felt as she neared that age.  This line from her obituary struck me, “…if courage could have availed, she would have lived.”  She spent nine years teaching in the public schools before she was too ill to carry on.

The next child to be ripped from the family was Hattie, who died when she was 28, on February 6, 1892, four years to the day of Albert’s death.  Hattie taught primary school in 1887 and 1888, but when her health began to fail, she was forced to spend her time doing everything she could to get well.  When a simple change in climate didn’t provide a cure, Hattie went to live in a tuberculosis sanitarium in Asheville, North Carolina, where, although she improved for some time, the disease claimed her life.  It was while her father was in North Carolina with her that he also fell ill with tuberculosis.  He lived less than two years after Hattie’s death.

John Boeckling came from Germany in 1851 and opened a grocery business in 1880.  Although difficult to read, his obituary is titled “Unrelenting Death.”

Emma married Will Bray and the couple had a daughter, Harriet, who was just 12 years old when Emma died in 1904.

Hannah and her son, Frank, were the only family members whose lives weren’t claimed by tuberculosis.  Hannah died in 1913 and Frank in 1916.  He had lived to be 54, and I suspect that, to him, it felt like a ripe old age.