I picked up these old photos from a wonderful shop on Etsy, The Wurdeman Studio.  If you love old things, especially photos and jewelry, take a moment to check it out. 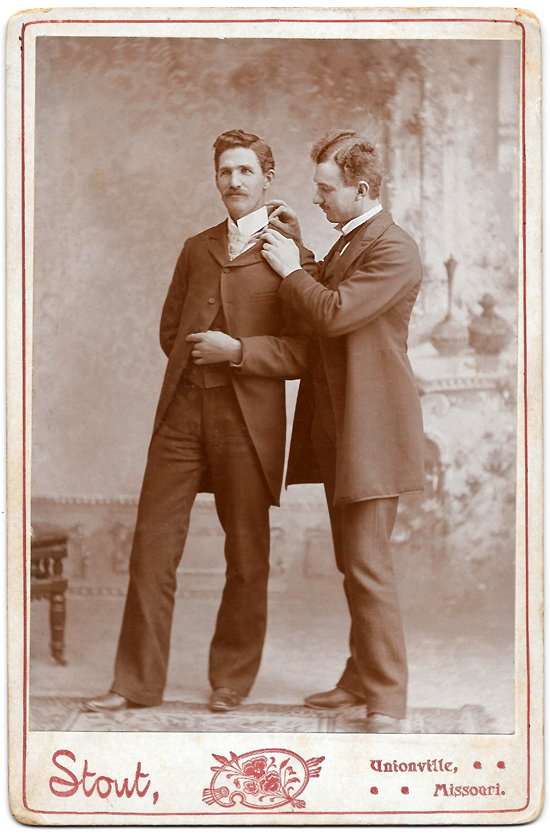 The back of this cabinet card photo reads, “J.W. Helton & J.W. Hibbs, Unionville, Mo, Age 27 & 30.”  James Helton and John Hibbs grew up together in Unionville.  The posing of the two men made me think of a best man helping a groom get ready for his big day. However, according to the ages, this photo would have been taken in 1895.  James, on the left, first married Cerula Caster in 1897 and then married newly turned 18-year-old Emma Josephine Severs in 1899. 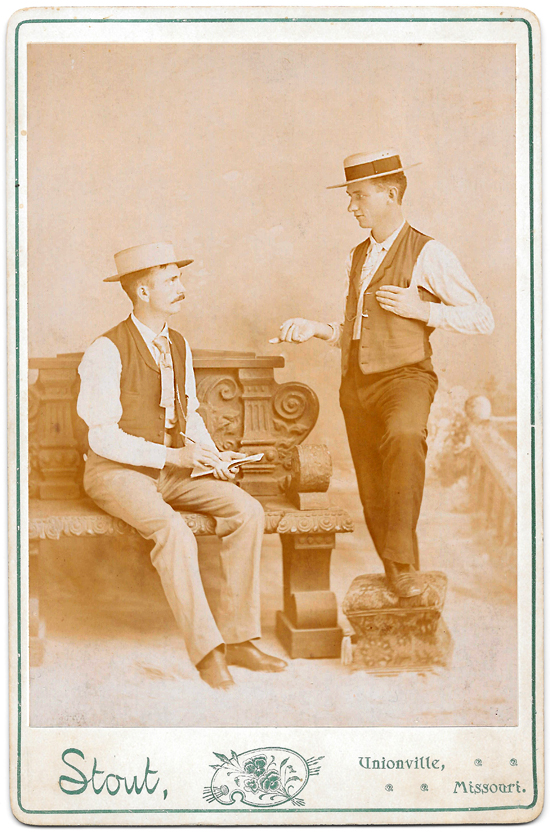 I believe this second image was captured about 1890.  The man sitting is identified as James Helton, and appears to be in his early twenties.  The back identifies the man standing, only as “Helton.”  James had brothers who would have been 24 and 18 at the time.  However, I think the second man in this photo looks an awful lot like John W. Hibbs.

In March of 1912, Dr. James W. Helton, 44 years old and recently divorced, relocated to Butler, Missouri.  Emma, who obtained the divorce on the grounds of cruel and inhuman treatment, was living with their 8-year-old daughter, Lovelle, and her new husband, Dean Davis, in Kansas City, Missouri.

What constituted cruel and inhuman treatment in this case?  According to divorce documents, James was guilty of striking and beating Emma, cursing and swearing at her, and calling her vile and opprobrious names.

Dr. Helton did not reserve his cruel treatment for his wife.  On July 10, 1912, he was arrested on charges of raping a 17-year-old girl, Miss Ruby Seese.  The charge was later dropped and a charge of performing an abortion was lodged.  Unable to make bail, James remained in jail until early December when friends from Green City, where he had lived for some years during the early 1900s, posted his bond.

Interestingly,  Dr. Helton was once again a married man when he went to trial.   Less than a month after he had been released on bond, he wed 19-year-old Miss Mary E. Cooper, at her parents’ home in Butler.

On February 15, 1913, Dr. Helton was found guilty of committing abortion.  He appealed to the State Supreme Court, and his conviction was discharged in 1914.   It’s the documentation of this appeal that provided me with details of the crimes of Dr. Helton, and when I knew, without a shadow of a doubt, that he was a monster.

As part of the prosecution, Ruby Seese testified that on May 15, 1912, after leaving Dr. Helton’s office, the two walked together and he “placed a handkerchief saturated with some kind of sweet-smelling stuff to her nose and mouth” to render her unconscious, then took her into a field and had sex with her.  She said she could scarcely recall the act, but after walking her home, Dr. Helton told her of it and asked that she not tell her family.  Helton, although he denied Ruby’s account of May 15, admitted that he had sex with her multiple times at his office.  In regards to the charge of abortion, Dr. Helton admitted to inserting a metal instrument into the vagina of his victim on multiple occasions.  However, he explained he only did so to “cleanse her sexual organs and prevent conception.”

During the trial, it became known that this wasn’t Dr. Helton’s first sexual assault. While living in Green City, Missouri, he plead guilty to rape or attempted rape of Jessie Cameron.

Tragically, in 1919, James’ third wife, Mary, committed suicide.  I suspect that she could no longer endure the doctor’s abuse.  Or for all we know, Dr. Helton may have murdered her and staged it as a suicide.  There was no inquest.

Something that stuck with me was a statement made by the prosecutor during Helton’s trial “This girl that never had had a breath of slander against her until this serpent crossed her path.”  James W. Helton was a monster who preyed on young women and used his profession and authoritative position as a doctor to aid in doing so.  A serpent, indeed.

2 thoughts on “Until the serpent crossed her path”