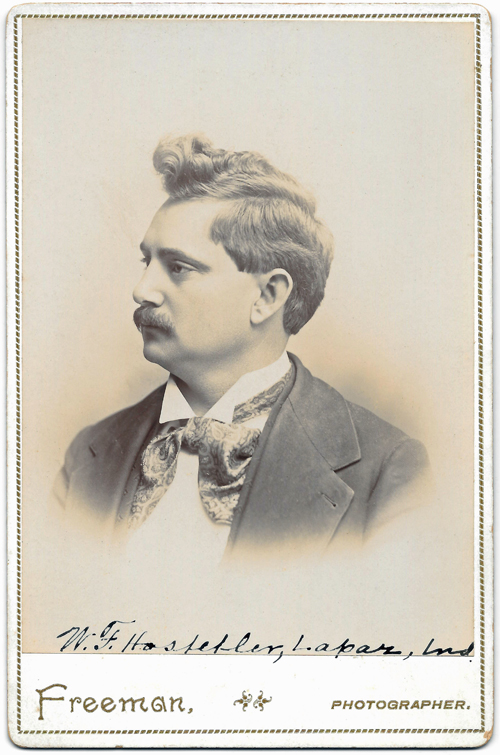 This dandy cabinet card was discovered in Goshen, Indiana.  The sitter screamed, “Take me home! I’m bold and interesting!”

William Francis Hostetler, born in La Paz, Indiana in 1870,  was a hustler, in a good way.  He was an enterprising person, determined to succeed, a real go-getter.

Which is why I was surprised to find that William’s death certificate listed his only occupation as a farmer.  I’m sure he would have been surprised as well, and disappointed, considering he spent the majority of his adult life as a teacher.  In addition, for quite a few years, while also teaching, he sold insurance for the New York Life Insurance Company, and he was self-employed, offering penmanship services for individuals and businesses.

William was a graduate of Zanerian Art College in Columbus, Ohio and began teaching penmanship and drawing in the La Paz and Bremen schools in Indiana in the early 1890s.  Later, he was a Professor at the Angola Normal College and served as Principal at La Paz.  In 1901, William was the principal of the English department at South Bend Commercial College.

He was well liked in his community, evidenced by the amount of coverage his daily life garnered in the local newspapers.

It seems William’s students looked upon him as a friend, as well, even throwing him a surprise birthday party, where they presented him with a photo album.

William contracted malaria in 1898.  This was about the time it was discovered mosquitoes transmitted the parasites which cause the disease.   William recovered.  It was typhoid fever, in 1917, that claimed his life.  Typhoid is spread mainly via water, food, but also sometimes other unsanitary conditions, such as outhouses.

When you hear the words typhoid fever, the case of Typhoid Mary might come to mind.  Mary Mallon, an Irish born cook, and a carrier of the disease is blamed for infecting at least 51 people and killing three before being quarantined for life on Brother’s Island in New York.

If you are a fan of audio podcasts and would like to learn more about Mary Mallon, I recommend you have a listen to The Most Horrible Seaside Vacation on Radiolab.

So, how did William contract typhoid?  South Bend, Indiana suffered a typhoid epidemic in 1917.  It was suspected to be caused by privy vaults, or outhouses.

Upon his death, William left an $8,000 life insurance policy to his heirs.  He had paid just one annual payment of $136.80!  I imagine his wife, Amelia, and sons, William and Robert, were grateful for the financial assistance during their time of grief.

2 thoughts on “The Hustler”