Harriet Bowden, or Hattie Bowden, as she was identified on the back of this cabinet card, was born in 1869 in New York.  Sometime after 1873 her parents, William and Louisa, relocated to Ohio.  In her early twenties, when this photo was taken, Hattie worked for the Western Suspender Company and as a Milliner in R.B. Maxwell’s shop.

Robert B. Maxwell advertised his store in the 1894 Mansfield City Directory as having dry goods, notions, millinery, and cloaks.  In large, bold print at the top of one page, I found the advertisement, “Maxwell’s for Umbrellas. Best and Cheapest.” 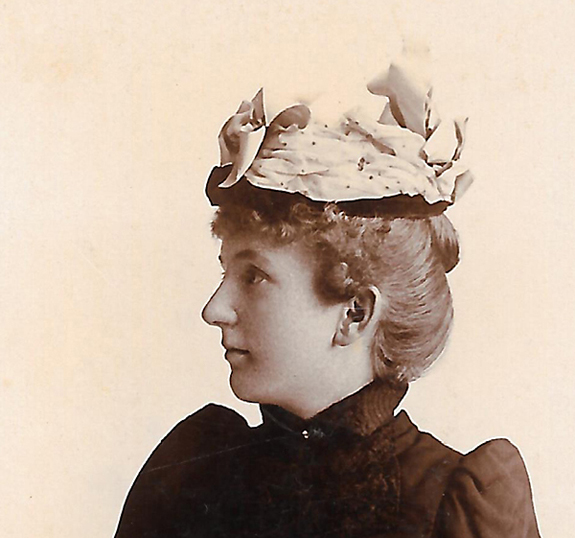 I wonder if Hattie designed the hat she’s wearing in this photograph.  I think it’s a work of art!  On a side note, does anyone else chuckle at a hat designer named Hattie?

Hattie seemed to disappear after 1897.   Her father passed in 1893, and her mother in 1900.  I feared that she may have died, as well.  Luckily, I found her mother’s obituary and it provided me with the answer.

Hattie married William Franklin Hauck and was living in Marion, Ohio, in 1900.  She had one child, Harry.  She lived to be 69 years old.  I find it quite sad that her obituary doesn’t mention her by name, only as an extension of her husband.

I wanted to add, that I read the fancy script at the bottom of this cabinet card as Poller, or possibly Pollen.  I did a quick search and wasn’t able to locate a photographer by either of those names, but didn’t dig any further.  I normally research photographers as a way to pin down dates, and I was quite confident dating the photo based on Hattie’s fashion and age.  However, I stumbled across the following portrait sketch in the 1891 Mansfield City Directory, and I was able to learn that the photographer was Ezra J. Potter.  His obituary claimed that he was “known as one of the most proficient photographers in northern Ohio.”

One thought on “Hattie’s Hats”