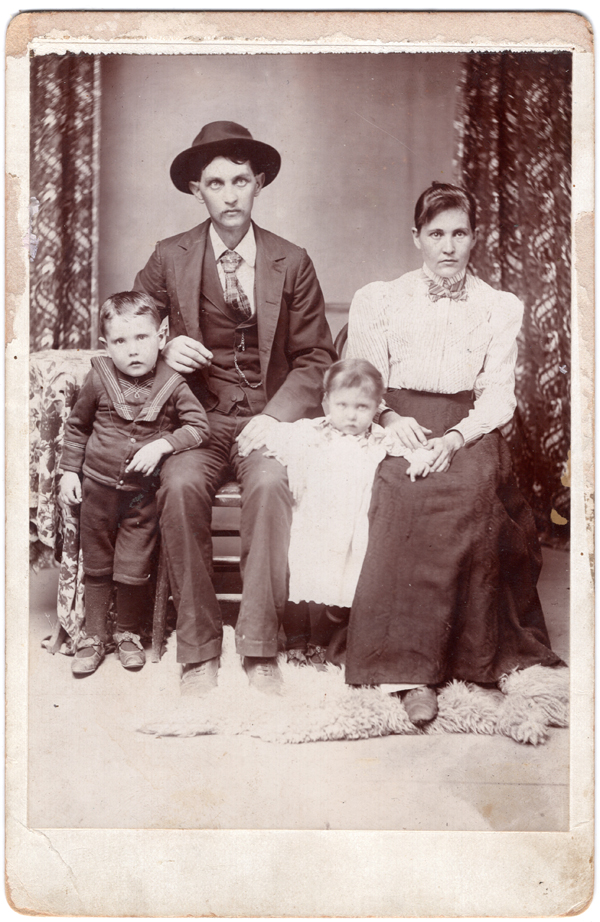 Frank Horn worked for over twenty years at the Conn Company, a musical instrument manufacturer in Elkhart, Indiana.  I imagine he was the subject of many horn jokes in his day.  Frank was a stationary fireman, which meant he operated high-pressure steam boilers in the factory.

Frank, his wife Ell (nee Seabourn), and their children Walter and Eva sat for this cabinet card photo about 1898.  Notice the children’s matching shoes! Frank was working as a lead miner in St. Francois, Missouri (about an hour south of St. Louis.) It was in 1904 that the family moved to Elkhart.

Frank and Ell had eight children: Walter, Eva, John, Flossie, Bertha, Glada, Helen, and one child that was born and died sometime between the years 1900 and 1910.  Sadly, little Eva also died during this time frame.  I was not able to find her death or burial record.

I picked up this cabinet card in a little antique shop in Fort Wayne, Indiana.  The reverse reads “Frank & Ell, Horn, Walter, & Flossie, 1909.”  (Ignore the slash through 1909, as I made that mark before I remembered that I had not yet made a scan as I found it.)  It’s not possible that this photo was taken in 1909, as Walter, born in December 1894, would have been a teenager.  And the little girl can’t be Flossie, who, born in 1904, was ten years younger than Walter.  Notice that the author of the identifying writing initially penned the name Eva and then scribbled it out.  Clearly, like the date, they made a mistake or were giving their best guess.  This serves as a reminder to always treat identifying writing as a lead and research, research, research!

Frank passed in 1936 and Ella followed in 1948.  I was surprised that neither obituary mentioned Eva preceding them in death.

During my research on ancestry.com, I came upon a Horn family tree with a lot of photos of Walter.  I contacted the owner and discovered that Walter was her grandfather.  She was thrilled to see the faces of her Great Grandparents, Frank and Ell, and I’m happy that I was able to reunite this cabinet card photo with family.

Walter lived to be 88 years old and led quite a full and interesting life, including serving his country during World War I, founding the Horn Electric Company, and being elected mayor of Hibbing, Minnesota.

10 thoughts on “Don’t Toot Your Own Horn”