Hattie was born Hedwig Reuter on June 24, 1864, in Milwaukee, Wisconsin.  The boy in the photo was her brother, Robert.  They were the oldest children of Jacob and Ida (nee Geier) Reuter, immigrants from Germany.  Look at their matching shoes!

This carte de visite (cdv) is the second photo I researched out of what I’ve dubbed the Waukesha album because of where I found it, in Waukesha, Wisconsin.  The few photos with names written on them are children that appear to have been born about the same time period, the late 1850s to early 1860s.  If you’re interested, here is a link to the first post, The Butcher. 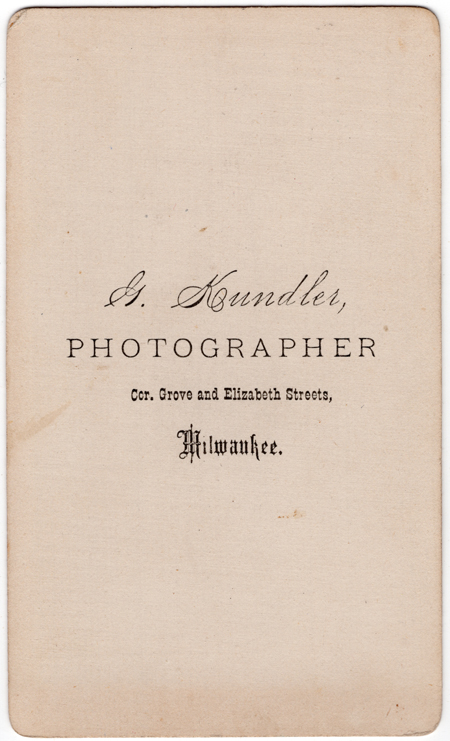 I estimate Hattie’s and Robert’s ages at the time of this photo to be about 10 and 9 years, which would date it to 1874, about the time Hattie’s education ceased upon completing 6th grade.  I suspect this was due to Hattie being needed more around the house, as by this time she had two more siblings, Fritz and Nellie.

In June 1898, Hattie was pregnant with her fifth child when the family was caught up in quite a big story in Milwaukee.  Louis’ half-brother, Adolph Graeven, a grocer, was shot five times and left for dead by his friend, Nicholas Bauer, a baker.  Fortunately, Adolph survived the ordeal.

Nicholas, 29 years old at the time of his crime, was found guilty of attempted murder, yet served just one year in the county jail. When released, he returned to First Avenue in Milwaukee, to his wife, Anna, and his job as a baker.  Nicholas lived to be 85 years old.

Why was I so interested in Nicholas Bauer?  When I read the name Bauer, I immediately recognized it from another cdv from this album that I’ll be featuring next, of the Bauer sisters.  Had the Reuter and Bauer girls, most likely childhood friends, lives intersected in such a horrible manner?  I wasn’t able to discover the names of Nicholas’ parents, so I can’t say for sure.  Nicholas definitely wasn’t a member of the Bauer girls’ direct family, but he may have been a cousin.

Hattie and Louis had eight children, seven of whom lived to adulthood.  Louis died in 1914.  In 1940, Hattie, aged 76, was still living in Milwaukee.  Her son, Hubert, a manager of a bakery, and his wife, Charlotte, were living with her.  Unfortunately, I wasn’t able to locate a death record for her.

Robert Reuter died in 1935, aged 69, and is buried in Forest Home Cemetery.

6 thoughts on “The Baker”