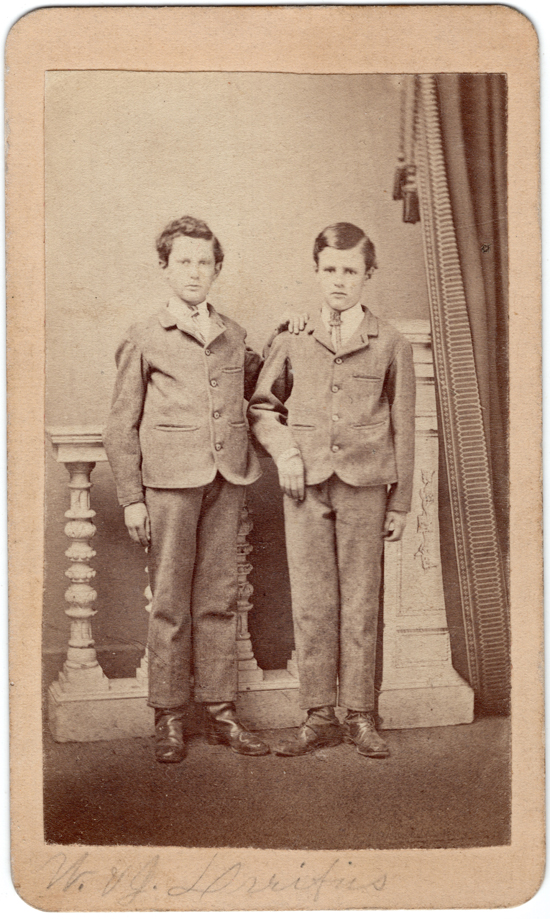 This carte de visite (cdv) is the fourth photo I researched out of what I call the Waukesha album because of where I found it, Waukesha, Wisconsin.  The few photos with names written on them are children that appear to have been born about the same time period, the late 1850s to early 1860s.  If you’re interested, here are links to the previous posts; The Butcher, The Baker, The Pottery Maker.

Wendelin and Julius Dreyfuss were brothers living near Hale’s Corners, Wisconsin (then the 8th Ward and now a suburb of Milwaukee.)   Their father, Joseph, an immigrant from Germany, owned and operated the 18 room Hotel Dreyfuss.

Although their mother, Catherine (nee Sporer), was always listed on census records as keeping house, I suspect she played an important role in keeping the hotel, which also provided a restaurant, running smoothly. 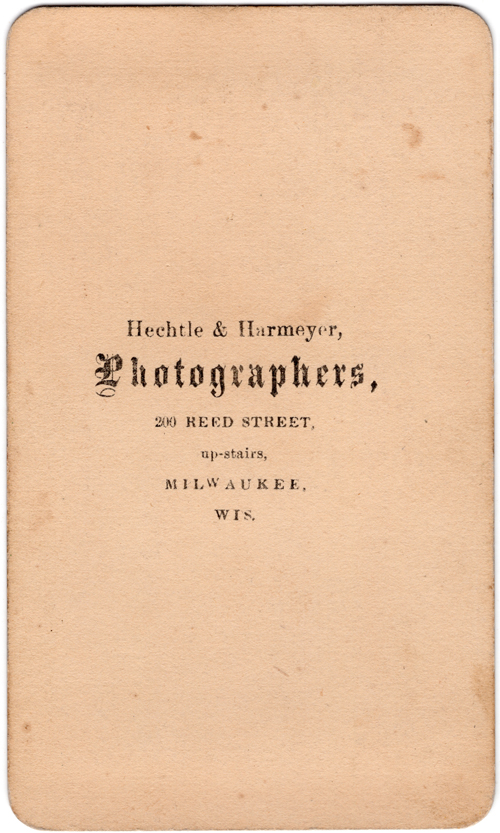 The second and third eldest out of five children, Julius and Wendelin, were born in February 1858 and November 1859 respectively.  The photographers, Frederick Hechtle & Francis Harmeyer, opened their studio at 200 Reed Street in Milwaukee about 1870-72.  It’s hard for me to imagine the boys were at least 12 and 11 years old when they posed for this photograph.  They look so much younger to me.  It’s possible this cdv is a copy of an earlier image, or maybe their “baby faces” have me fooled.

It seems there was a bit of tension in the family regarding finances, as demonstrated by the boys’ father’s remarks in his will.  “My son Julius I, think is unjust, in talking to oustiders, what he intenting to do after my death, in order to get hold of my property wich legaly & lawfully has to be divided amongst all my other children, as provided by my provisions made, in this my last will (sic).”

Julius must have purchased his siblings’ shares of the hotel or they came to some type of agreement, as Julius owned and operated the inn and restaurant until 1928, a year before his death.  He died, aged 72, on December 24, 1929.

Wendelin worked as a traveling salesman, and during his retirement years was part owner of Ardmore Pharmacy at the corner of N. 16th and W. Wisconsin in Milwaukee. Like Julius, Wendelin died during the Christmas holidays, on December 27, 1941.

Interesting tidbit, Julius was a member of the Groundhog Club, which is still active today.  Members share their birthday, February 2nd, with Groundhog Day!

Unfortunately for Julius, who died in 1929, it seems Wendelin took his place at the Groundhog Club meeting held Feb. 2, 1932, and stole his spotlight, or maybe, in this case, “shadow” would be the appropriate word.

7 thoughts on “The Inn Keeper”