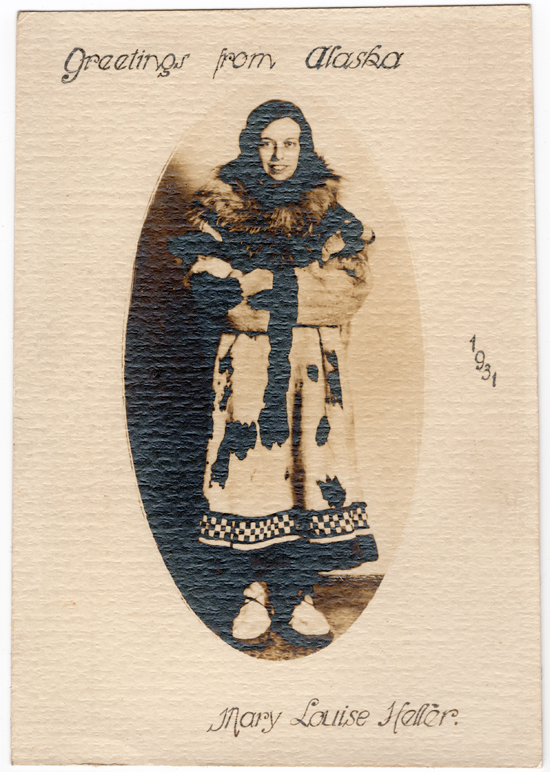 I found this old photo in an antique mall in Auburn, Indiana.  My Grandmother was a Mary Louise so this had to come home with me.  I suspected it was a vacation photo and didn’t have high hopes of identifying the sitter. Fortunately, I was wrong.  The first Mary Louise Heller I located on ancestry was a New Castle, Indiana high school graduate in 1927 and the yearbook photo was a match!

“Charm attends her everywhere,
She has such a winsome air,
She’s little, but she’s awfully wise,
She’s a wonder for her size.”

Mary Louise was born on July 20, 1909, eleven days after her father, Herbert, died of cancer.  The thirty-eight-year-old florist was a well-known businessman in New Castle.  It’s said that the city’s nickname, at the time, of “Flower City” was due to his expansive 8 block greenhouse.

How sad that Mary Louise and her father never got the chance to know each other.  This hit close to home for me, as my mother died when I was seven months old.  Mary Louise and her brother, Herbert, Jr., were raised by their mother, Mary (nee Smith.)

It turns out that Mary Louise wasn’t in Alaska on vacation.  She traveled to Fairbanks, Alaska in 1931 with her Uncle Lynn Smith, Marshal of that district.  By October of that year,  she was employed in his office as an office deputy.  As a Marshal, her Uncle was responsible for apprehending wanted fugitives, transporting federal prisoners, and protecting endangered federal witnesses. I wonder what Mary Louise’s duties were as an office deputy.  Most likely paperwork and secretarial duties, but oh what an interesting job that must have been!

After the untimely death of her Uncle, who suffered a heart attack in March 1933, Mary Louise handled his estate as administratrix.  Later that year, upon the completion of those duties, she returned to New Castle.

Mary Louise never married and had no children.  She died June 24, 1984, aged 74 years, and was buried in South Mound Cemetery.

6 thoughts on “Greetings from Alaska”