I purchased this real photo postcard, also known as an RPPC, at the same time as another antique photo but didn’t pick up on the connection right away.  You might want to read my post about Birdie and Bert as this is Bert’s younger brother, James McCollum.  Brace yourself, it’s another sad story. 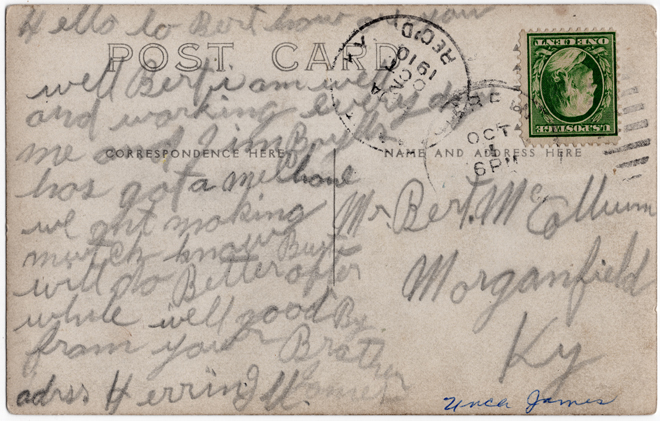 “Hello to Bert how are you
well Bert i am well and working every day
me and Jim Boylls has got a melhone
we arnt making mutch know but will do
Better after while well good By.
from your Brother James
adrss Herrin Ill” (sic)

James Marshall McCollum was a coal miner, as was his father and almost all of his brothers, so it’s no surprise that he made his way to Herrin, Illinois just 70 miles west of his hometown of Caseyville, Kentucky.  Herrin was known for its coal mining industry, with more than 30 mines operating within six miles of the town.  I wish I knew what James was talking about when he mentions the “melhone” he and Jim Boylls had.  If you have an idea what this might have been please leave a comment.

James’ father, William P., died when he was a young boy.  In April 1910, James was living with his mother, Margaret (Carter), and two of his siblings, William H. and Frank. This means that James hadn’t been in Herrin long when he penned this note to his brother in October 1910.

I can’t say how long James remained in Herrin however his September 1918 WWI draft card shows that he eventually moved back home and continued working as a coal miner.  The most interesting bit of information was listed under the physical disqualification section.  James was missing his right eye!  I don’t think I would have noticed it in his photo if I hadn’t known.  You have to look closely but once you do it’s quite evident and makes sense why James would have posed in this manner to mask what I can only surmise was a physical trait he was self-conscious about.  Of course, I’m curious as to how he lost his eye but it’s a question that will remain a mystery.

Not even two months after he’d submitted his draft card, James, aged 32, died during the influenza pandemic of 1918.  His brother, Frank, succumbed to the illness ten days later, on Nov. 12.  They are buried in the Ark Lodge Cemetery in Caseyville.  James’ death certificate states that he was divorced.  Regrettably, I’ve not been able to identify his wife or learn whether he had children.