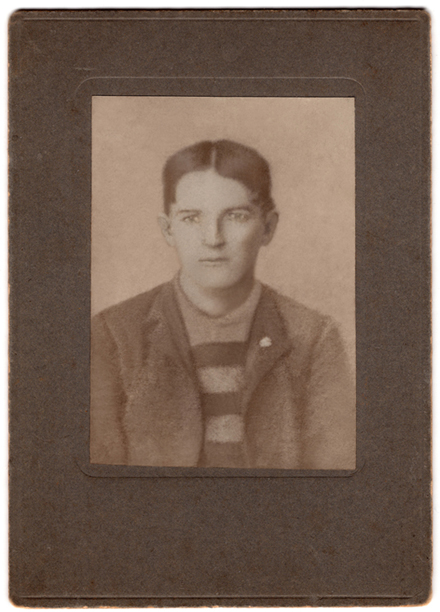 Hugh Chalker was born and lived his entire life in Ferry Township, Michigan which is about 20 miles inland from the Lake Michigan shoreline. He was one of six children born to Fred and Sylvia (Bearss) Chalker.

The original small cabinet photo was in quite poor condition when I picked it up in an antique shop but I didn’t want it and therefore the memory of Hugh to be lost completely to time.  I’d like to thank Marija of My Retro Photo for her wonderful repair work on this image.

Tragically, Hugh Chalker was the victim of a freak accident.  When he was just sixteen years old a dog jumped on him causing his gun to fire a shot into his shoulder.  Hugh died from loss of blood before aid arrived.

I wish I had more to write about but the only other glimpse into Hugh’s life is that his death certificate reported his occupation as a farmer.  His father was a farmer so it makes sense that Hugh, as a teenager, would have been helping out on the family homestead.  But would he have continued with this career or chosen a different path?  If Hugh’s life hadn’t been cut drastically short it’s possible that he might have become an auto mechanic like his younger brothers, Garret and Arthur.

Hugh is buried beside parents in the Ferry Township South Cemetery.