These vintage snapshots were found together.  Winslow Deruke on the left and Stella and John Kotecki on the right.

Without the last name given, it wasn’t easy to identify our sitter.  But I found Leo Winslow Derucke in the 1915 Jersey City directory residing at 143 Hopkins Ave.  Winslow was 24 years old at the time.

What I can’t find is a record of Winslow marrying Stella.  In 1915 he married Lucy Harriet Jankiewicz.  The couple had a daughter Henrietta and they remained married until Lucy’s death in 1968.  Maybe the marriage to Lucy wasn’t his first. 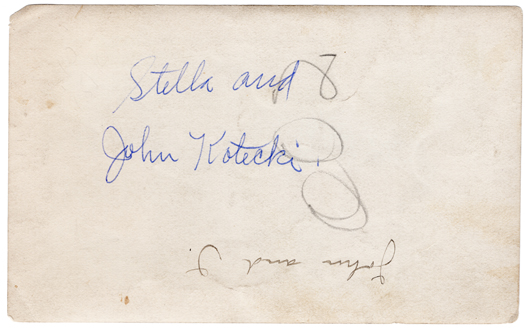 Writing on the reverse of Stella’s photograph leaves room for interpretation. Are Stella and John siblings and therefore her surname is also Kotecki?  Maybe they are cousins or friends.

There is a note written by Stella which reads “John and I.”   I’m sure that the author of the writing in ink (“Stella and John Kotecki”) is the same person who penned the address on Wilson’s photograph…note the “J” and “k” are the same.

I wasn’t able to locate a Stella Kotecki in New Jersey, nor a Stella Derucke.    And although I found a few John Kotecki’s, none led to any answers about Stella’s identity.

I couldn’t even find Winslow’s final resting place.  Blah!  This is another one of those times when I can only hope a relative stumbles upon this post.

3 thoughts on “The Kotecki Cliffhanger”