Will Walker is such a common name.  It’s a good thing the author of the writing on the back of this framed photo booth picture included a location. 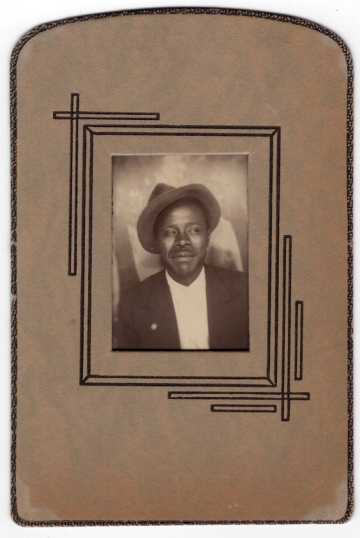 Still, much of Mr. Walker’s life is a mystery.  Born on February 13, 1880, in Muskogee, Oklahoma, Will was living in Phoenix, Arizona before he landed in Grand Junction Colorado about 1939.

Will took a job as a porter at Hugh Moss’s Barber Shop located at 355 Main Street.  There must have been a sleeping room in the back or an apartment above the shop because Will even lived there for a time. He put in long hours (60 hours per week) sweeping, cleaning, and stocking supplies.

Hugh Moss was a white man and, gleaned from mentions in the newspaper, the barbers at his establishment were also white.  I found this image of a 1930s/40s barbershop to give us a glimpse into what Moss’s shop might have looked like.  Although we have to imagine some ladies in the mix since Hugh’s wife, Martha, provided beauty shop services as well.

With genealogy research it’s easy to get caught up in the basic facts of where someone lived every ten years, their occupation, who they married, and how many kids they had.  Of course, there’s so much more to a person and I wanted to try to get a sense of what Will’s daily life was like.

The above postcard shows Main Street as it was about 1946.  By that time Moss’ was located on the left side of this street view, just past Treece’s Furniture (about where that first gold car is parked.)  Will spent a lot of time here. I began imagining him walking down this street, chatting with passersby outside the barbershop, stopping in one of the cafes for a bite to eat, shopping for a new pair of shoes, dropping off his suit to be cleaned at Slohn’s Cleaners.

The problem with this exercise is that I was looking at it through the eyes of a white person.  As a Black man, Will couldn’t drop into a local cafe for lunch.  They didn’t serve Black people.

Like other white men and women who owned and/or worked at businesses, the proprietor and staff of the Alpine Cafe were able to practice their racism openly and only serve whites. How many businesses on Main Street could Will even step foot in?

Segregation was just one form of racism that Will faced.  Note how The Daily Sentinel framed themselves as if they were one of the “good ones”, making their case for exceptions.  But they made it clear they did not believe in racial equality.  How many businesses allowed Will to shop, benefited from his hard-earned money, but treated him poorly or took advantage because they were racist? 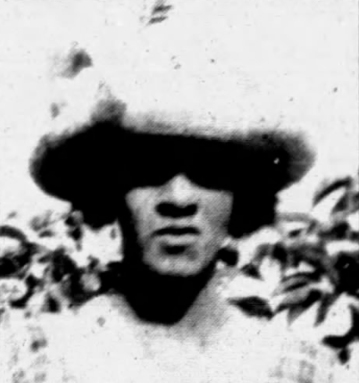 The handsome fellow that he was, it seems that Will soon won the heart of Ceretha (Young), a woman 25 years his junior.  In 1941, the couple lived with her father, William, who owned a shoeshine business.

Initially, it appeared that Will and Ceretha’s relationship was short-lived.  In 1943, and subsequent years, Will was listed in city directories without her.  And Ceretha was listed as Mrs. Ceretha Williams, widow of Richard.  She must have married again, right? I don’t think so.

The “aha” moment came when I compared Will’s and Ceretha’s addresses.  They matched up 99% of the time!  If I had to guess, I’d say that Ceretha was a widow when Will met her and that they never legally wed. So, why were they listed in the 1941 directory as a married couple?  It might have been because they were living in Ceretha’s father’s home and wanted to appear “proper.”

Were the two committed to each other?  Were they lovers turned friends?  Maybe Ceretha, with at least three previous relationships under her belt, was not of the mind to marry again.  The possibilities abound, so unless I come across more records, we’re left only with speculation.

Although Will and Ceretha moved around quite a bit,  Will’s porter job at Moss’ was a constant.  He worked at the shop until the owner died in 1951. The last trace I found of Will was in 1953.  He and Ceretha resided at 121 Colorado Street and he was working again as a porter, this time at the Ace Barber Shop.  He would have been about 73 years old.

Ceretha lived to be 96 and is buried in the IOOF Cemetery in Grand Junction. According to the City Cemeteries’ clerk there is no burial record for Will Walker. Since Will had an entire life before Grand Junction it’s possible he went to live with a relative in his senior years or that upon his death his body was sent to a family member for burial.

Ceretha had one daughter, Jessie Mae (Baker).  I’d hoped to contact Jessie’s son, Clifford Bass, to see if he remembered Will Walker and knew what became of him.  Unfortunately, Clifford died last year.  He’s also buried in the IOOF Cemetery.

I wish I knew more about Will, beyond the 14 years he lived in Grand Junction.  After all, that’s just a drop in the bucket of life.

7 thoughts on “A Drop in the Bucket”