How I wish I knew the identities of the young women featured in this RPPC (real picture postcard.)  I love the half posed half candid nature of the photo.  According to a penciled notation on the back, this moment in time was captured on July 4 in Alzada. 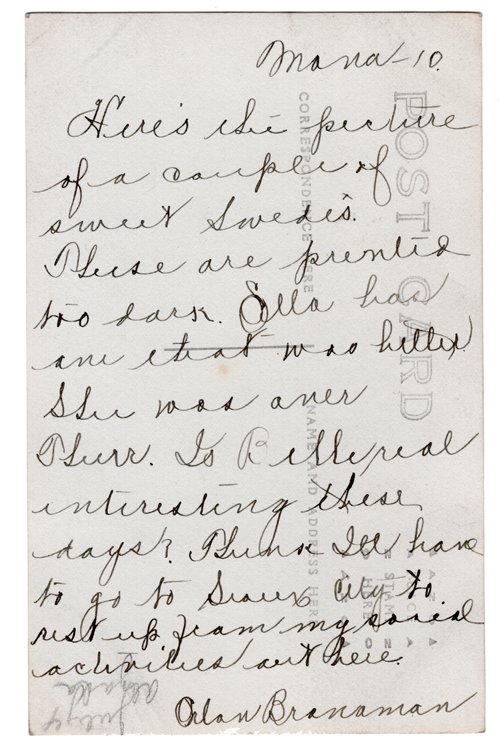 “Mona – 10
Here’s the picture of a couple of sweet Swedes. These are printed too dark. Olla has one that was better.  She was over Thurs. Is Belle real interesting these days? Think I’ll have to go to Sioux City to rest up from my social activities out here.
Orlan Branaman”

If, as I suspect, the “-10” stood for 1910, Orlan Branaman was a 31-year-old single railroad engineer when he penned this letter.  According to census records, Orlan, his mother, Ida, and sister, Beulah, were living in Covington, Nebraska at the time. But by 1915 when Beulah married Pearl McCutchen they were living in Mona, Wyoming.  Had they relocated shortly after the census or did Orlan’s visit there prompt the family’s move?

Although Orlan’s mother called herself a widow, his father, Cass Branaman, a horse dealer from Concord, Nebraska, was alive and well.  The couple split sometime before 1900.

As far as where the photo was taken…just 30 miles north of Mona sits Alzada, Montana!  I wonder what type of July 4th festivities Orlan and the ‘sweet swedes’ took part in that day.

Orlan died in 1962 and is buried beside his wife, Amelia, in the Graceland Park Cemetery in Sioux City, Iowa.